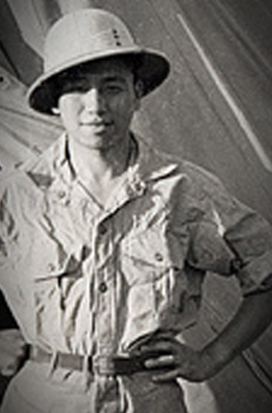 Roy Mah was already a Sergeant and enlisted with the 16th Canadian Scottish (Reserve) with Oblivion operatives Roy Chan and John Ko Bong when selected by Major Legg to lead the second group of operatives ound for India under the name FORCE 136. Officially he was recruited from Wetaskiwin, Alberta, but was pivotal in getting the Chinese Canadian community in Vancouver (his city of residence) to agree to let their ‘boys’ join in the war effort representing Canada. He trained in Poona as a dynamiter and led 109 men for an operation that would lead them to the Singapore/Malaysian front under the command of Lord Louis Mountbatten. He would return to Vancouver after the war and lead the effort to get voting rights and citizenship for Chinese Canadians with the support of the Unions. He founded and was the editor for 42 years of Canada’s first English language magazine for Chinese Canadians –The Chinatown News.